7 Day Nepal in a Nutshell

For those travelers who have always wanted to experience the magic and mystery that is Nepal but who don’t have the time to commit to an extended Holiday, Trek and Tours, a Nepali-owned company committed to the highest standards of environmental responsibility has developed a leisurely paced 7-day sightseeing package that incorporates some of the highlights of the unique blend of Hinduism and Buddhism that makes Nepal the fascinating and exotic country that it is.

Even the name “Kathmandu” elicits exotic images and associations. This historic capital city can easily overwhelm the newly arrived visitor with its crowds of people and congested traffic slowly jostling for space through its narrow streets and alleys. Travelling from the airport to the hotel, traffic will willingly part and give way only to grazing (sacred) cows. The vibrant stalls of the marketplaces compete for attention with architectural marvels that reflect Nepal’s cultural diversity and living heritage. One’s senses are at risk of being overwhelmed by the intensity of Kathmandu’s visual stimulation and auditory cacophony. Jetlag will quickly be forgotten in the magic of arriving in this magical land.

Starting and ending in Kathmandu, this tour allows the opportunity to experience the magic of Kathmandu’s historic markets, palaces, religious shrines and UNESCO’s World Heritage sites. Leaving Kathmandu, we will travel further afield into the justifiably world famous Kathmandu Valley. It is here that we will see and immerse ourselves amongst seven distinct groups of monuments and buildings that display the full range and unique blending of the Hindu and Buddhist cultures.

(The seven include the Durbar Squares of Hanuman Dhoka in Kathmandu, Patan and Bhaktapur, the Buddhist stupas of Swayambhu and Boudhanath and the Hindu temples of Pashupati and Changu Narayan.)

Kathmandu sits in a valley and has an elevation of approximately 1400 metres (4600 feet). We will be aware of the ever-present Himalayas throughout our visit. The highest elevation we will achieve will be 2195 metres (7200 feet) when we travel to the hill station of Nagarkot.

At various times throughout our journey, we will admire panoramic views of the rugged Himalayas. What will surely be a “life memory” will be an early-morning scenic flight over the Himalayas including views of Mount Everest. 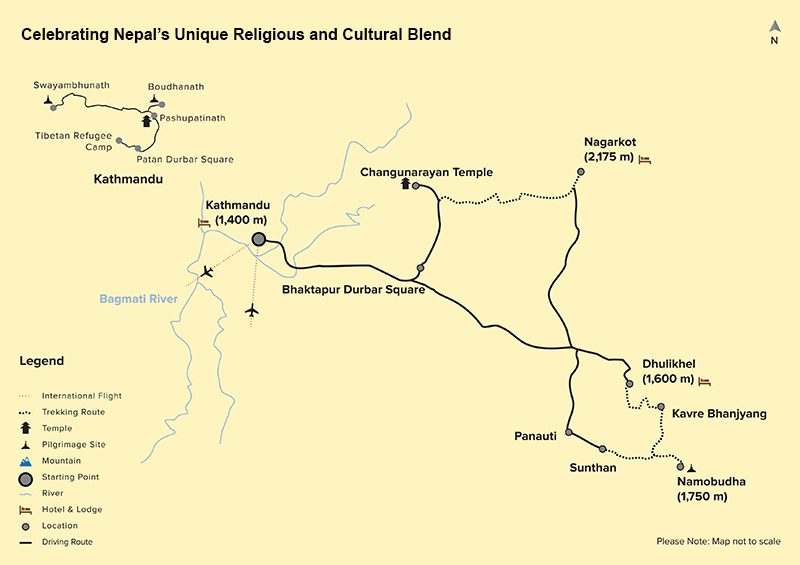 Immediately outside of Customs you will be greeted by our representative and transferred to your comfortable hotel. The remainder of the day will be at your leisure. Once you are settled, you will have various options to best begin your exploration of the sights of this ancient, exotic and fascinating city.
Overnight in Kathmandu

For those interested, we offer an opportunity to take an optional early morning sight-seeing flight over the rugged Himalayan mountains. You will be transported to the airport by private van. Kathmandu’s airport can be chaotic with various international flights landing and small groups of hikers and mountaineers departing on small planes for their domestic treks.  We will guide you to your plane and ensure that you smoothly board your 45-minute flight that will offer a stunning perspective of the Kathmandu Valley, lush vegetation, torrential rivers and wide valleys. The panorama shifts to jaw-dropping views of the jagged, towering snow-covered peaks whose outline is familiar to all. The plane will pass close to Mount Everest … and yes, it’s profile really is just as impressive as it looks in photographs!

After landing at the airport and returning to your hotel for breakfast, we will travel by private van to Pashupatinath, the largest Hindu temple of Nepal. Dedicated to the supreme Hindu god, Shiva, we will see exceptional carvings of various deities. Our guide will explain the meaning of the details of the fascinating ornate architecture of the various shrines and temples.

We will then drive to Boudhanath, the largest Buddhist stupa (dome-

shaped shrine) in the world. A major shrine on the ancient Indo-China trade route, this stupa offered blessings for a safe journey to traders, scholars and scholars who would be travelling through the high Himalayan passes on their way to Tibet.

After we enjoy lunch, our tour will continue to Swayambhunath. A Tibetan Buddhist stupa whose watchful eyes gaze from a hilltop overlooking Kathmandu.
Overnight in Kathmandu

After breakfast, our private van will transport us the 16 km to the city of Bhaktapur where we will marvel at the UNESCO-

recognized Durbar Square. The square is a perfect place to experience the glory that characterized the ancient Kingdom of Bhaktapur. We will enter the square through a golden gate that is decorated by carvings dedicated to various Hindu gods. There are myriad medieval monuments that will create a sense of awe and wonder.

Upon leaving, we will drive to the oldest Hindu temple in Nepal, Changunarayan, which is dedicated to Lord Bishnu, the supreme deity who Hindus worship as being the inner controller of the entire universe.

Our tour will conclude with a short hike to our resort hotel, located at the top of Nagarkot, the most beautiful hill station in the entire Kathmandu Valley
Overnight in Nagarkot

Thousands of visitors come to Nagarkot every year to witness the beauty of the sunrise from the top of the hill. We will awaken before the dawn so that we can feast our eyes upon the sunrise view over the Kathmandu Valley and the nearby Himalayan Mountains.

After breakfast, we will drive along a gentle road for 20 kilometres that will penetrate dense forests and pass small settlements. An hour later we will arrive at Dhulikhel, a city renowned for Newari culture. From here we will be treated to a stunning panorama of the high Himalayan peaks. The day will be spent exploring the various cultural,    religious and scenic attractions of this unique city that fortunately escaped serious damage from the April 2015 earthquake.
Overnight in Dhulikhel

Our highlight today will be a leisurely 4-hour hike to Namo Buddha, a quaint monastery that sits on top of a hill overlooking the valley. Legend has it that the monastery was constructed by a king in memory of his

youngest son who offered his flesh and blood to feed a starving tigress who had just given birth to three cubs. After his selfless act, the son was reborn in a higher realm.

After our lunch break, we will drive for 15-minutes in our van in order to reach Panauti, a Newari town that is situated in a valley within a valley. One of the oldest towns in Nepal, it is triangular in shape and lies within the confluence of two rivers. After exploring the architecture and shops that reflect it’s cultural heritage, we will drive the 20 kilometres back to Kathmandu.

Our morning’s tour has us driving the eight kilometres to the Patan. Best known for its rich cultural heritage, especially it’s tradition of arts and crafts. We will have numerous opportunities to witness artisans at work and if we wish, to purchase souvenirs directly from them.

The UNESCO World Heritage Patan Dubar Square is the site of an ancient royal palace. Despite being heavily damaged in the April 2015 earthquake, this Square remains a legacy of Nepali culture as well as containing priceless artefacts.

Though there is no shortage of things to do or sites to see, we have intentionally left unstructured in order to facilitate last minute shopping or photography.
Overnight in Kathmandu

After breakfast at our hotel, you will be chauffeured by our van through streets that have now become familiar. There is a rhythm to the chaos and a harmony to the mélange of sounds that emanate from the mixture of vehicles, wandering cows and countless stalls of shopkeepers and customers. The international airport will be a stark reminder and contrast to what you have experienced and will carry within you for the rest of your life. What Our Guest Says

Hello T&T team, The trip was an absolute winner, and was well and truly value for money. I am glad to say T&T provided me with an absolutely fantastic experience from start to end. Staff communicated clearly, were polite and.... More

Namaste to All at Trek & Tours I just wanted to thank your company again for a tremendously enjoyable trek. You are very professional in your approach and all your staff I dealt with from airport transfers, sightseeing in KTM, and your.... More

Dear Trek and Tours Team, Thank you to all the team for a wonderful trip. From the minute we arrived at the airport to the time we left we were well looked after and taken care of. I have nothing but praise to.... More

Dear Team, My Everest Trek (Sept 17, 2014), in Nepal, was outstanding! We were blessed with awesome weather, amazing Sherpa guides and friendly porters. The hospitality of the people we met along the journey was lovely. The accommodation was pleasant and meal times.... More 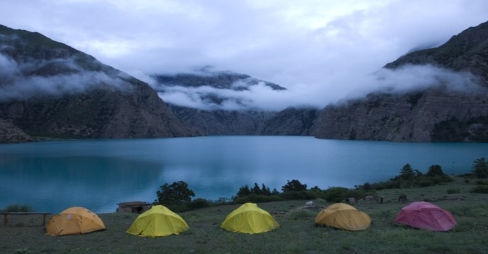